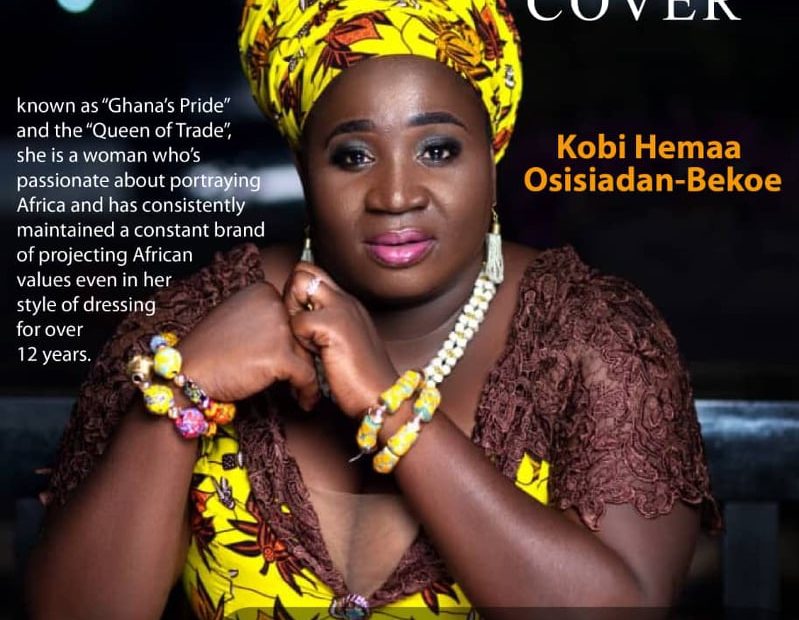 Kobi Hemaa Osisiadan-Bekoe is a media personality, entrepreneur and a consistent Made-in-Ghana product campaigner for over 12 years.Also known as “Ghana’s Pride” and the “Queen of Trade”, she is a woman who’s passionate about portraying Africa and has consistently maintained a constant brand of projecting African values even in her style of dressing for over 12 years. She got her name, ‘Ghana’s Pride’, when she hosted the Ghana’s Pride TV show on TV Africa in 2007. Her adornment in African wear ranges from headgears, accessories made with beads and native sandals popularly known as ahenema.

She holds a Masters In Public Relations from Ghana Institute of Journalism, a Certificate in Digital Marketing Strategy from the University of the Arts, London, MBA in Corporate Strategy and Economic Policy from Maastricht School of Management, Netherlands, a Bachelor of science in Accounting and Information System from Regent University College of Science and Technology, Certificate “A” 3 Year Post Secondary, St. Louis College of Education, Kumasi.

Contrary to the belief that television producers can only come from media institutions, producers like Kobi Hemaa have proven that with the right level of interest and entrepreneurial skills, individuals who are willing to learn on the job and put in a lot of hard work can equally excel.After teaching mathematics and science for 4years, she established her television production team and was appointed the Executive Director for Scenic Multimedia Ltd. Her first step in the media industry was at TV Africa where she hosted “Ghana’s Pride” in 2007.The program sought to project the rich Ghanaian culture while showcasing the various Ghanaian products on the market.

In 2009, she made her way to the Ghana Broadcasting Corporation (GTV)with the same program, through hard work; she gave birth to another program dubbed “Ohemaa Dwaso”. In 2014, she joined Light television as a Programs Manager and later rose to the rank of a Deputy Managing Director. After successfully developing strategic operation plans that reflect the longer-term objectives and priorities established by the board, she joined Homebase Television as a morning show host and Head of Television. In 2016, she was rated as part of the top five female morning show hosts in the country.  She has been popularly known as the voice that promotes Made-in-Ghana products and also addresses many societal issues.

Since 2007, she has hosted and produced: Ghana’s Pride on TV Africa and GTV, “Ohemaa Dwaso” on GTV and Adom TV, Exclusive to Cancer on Adom TV, Asempa Dwaso Morning Show on Light TV, Eboboba Morning Show on Homebase Television and Beyond the Ballot, also on Homebase TV. She has within the years directed other Tv programs, mentored and trained many young talent in the media landscape.

In December 2019, she was adjudged the TV Personality of the year at Ghana Leadership Awards for her exemplary leadership in the media industry and her consistent promotion of Made in Ghana for over a decade that has a significant and positive impact to advancing Ghana.

In 2009 she launched the first-ever e-commerce website to promote the sales and marketing of Made in Ghana products. The occasion was graced by the then minister of trade, Hannah Tetteh, Vice President of AGI, Industry CEOs, officials of Ghana Standard Board and Food & Drug Board among others.

Her act of generosity is unmeasured, not long ago, when she celebrated her decade in broadcasting, she launched the ”Angeles Foundation”  to promote Entrepreneurial skills Development, Boy Child Education and Fight in reducing Cancer cases in the country. The young entrepreneur, communication strategist and brand influencer has since assisted many people through her foundation.

These and many more she has and still achieving. For more enquiries and bookings contact African Seasoned Speakers Network via email and all social media afsesnet@gmail.com / #Afsesnetglobal #Afsesnetgh