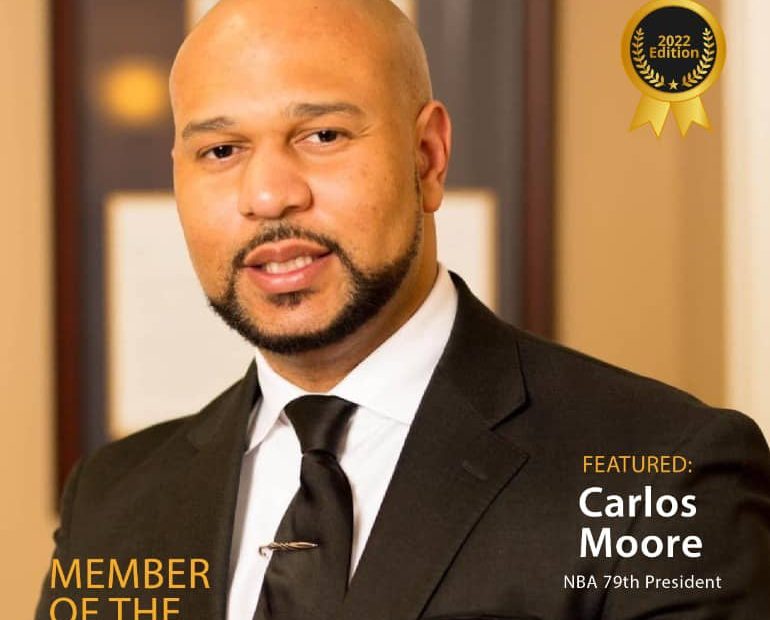 In 2011 after completing three years on the Mississippi Bar Ethics Committee, Moore was elected by his peers to serve a three-year term as a Commissioner of the governing board of The Mississippi Bar, which regulates all the lawyers in
Mississippi.

In addition to his bar association work, Carlos is very active in his community. Besides being a 2010 graduate of Leadership Grenada, he is a member of the Grenada Rotary Club, Grenada Chamber of Commerce, 100 Black Men of Grenada, Inc.
(Founding President), Kappa Alpha Psi Fraternity, Inc., The Million Dollar Advocates Forum. He is a board member and Founding Chair of the Grenada Unit of the Boys and Girls Clubs of the Mississippi Delta.

Before opening his law practice in 2006, Attorney Moore was employed by Harlow Law Firm in Grenada, where he was engaged in the general practice of law and also served as Assistant City Prosecutor for the City of Grenada from 2002-2006.
Licensed to practice before state and federal courts in Mississippi and Tennessee as well as before the United States Supreme Court, Carlos is the recipient of many honors, including being named the 2007-08 Outstanding Young Lawyer of
Mississippi by The Mississippi Bar Young Lawyers Division (1st African-American Ever To Receive The Award In Its Then Twenty-six-year history) And Being Named In 1998 As An Outstanding Young Man of America.

Carlos has also been the recipient of three NBA Presidential Awards, the NBA Young Lawyers Division was named Outstanding Division under his chairmanship in 2008, and most recently in 2010, he received the Meritorious Service Award from the NBA Young Lawyers Division as well as was named a 2010, 2011, 2012, 2013, 2014, 2015, and 2016 “Rising Star” in the Mid-South Super Lawyers magazine. In 2012, Carlos was named a White House Fellows Regional Finalist, ranking in the top 100 of approximately 1000 fellowship applicants nationwide and named Young Lawyer of the Year by the National Bar Association. Moore served as inaugural President and has been a founding member of the National Law Group, a consortium of plaintiff law firms across the country, since 2010, and is most noted for winning a $12 million jury verdict for a deserving client in 2010, just four years to the day after opening his law practice. Moore is also a 2013 graduate of the Collaborative Bar Leadership Academy.

In 2013, Moore was named Attorney of the Month and appeared on the June 2013 cover of Attorney at Law Magazine, Mississippi edition. In October of 2013, Moore was named the City Prosecutor for the Town of Webb, Mississippi, and in December 2013, Carlos became a graduate of Leadership Mississippi. In the summer of 2014, Moore was named a Trailblazer Under 40 by the National Bar Association, received the NBA Presidential Fred D. Gray Legacy Award, was honored with the NBA Solo and Small Firms Division prestigious Esquire Award, and completed his term as Chair of the Workers’ Compensation Section of The Mississippi Bar.